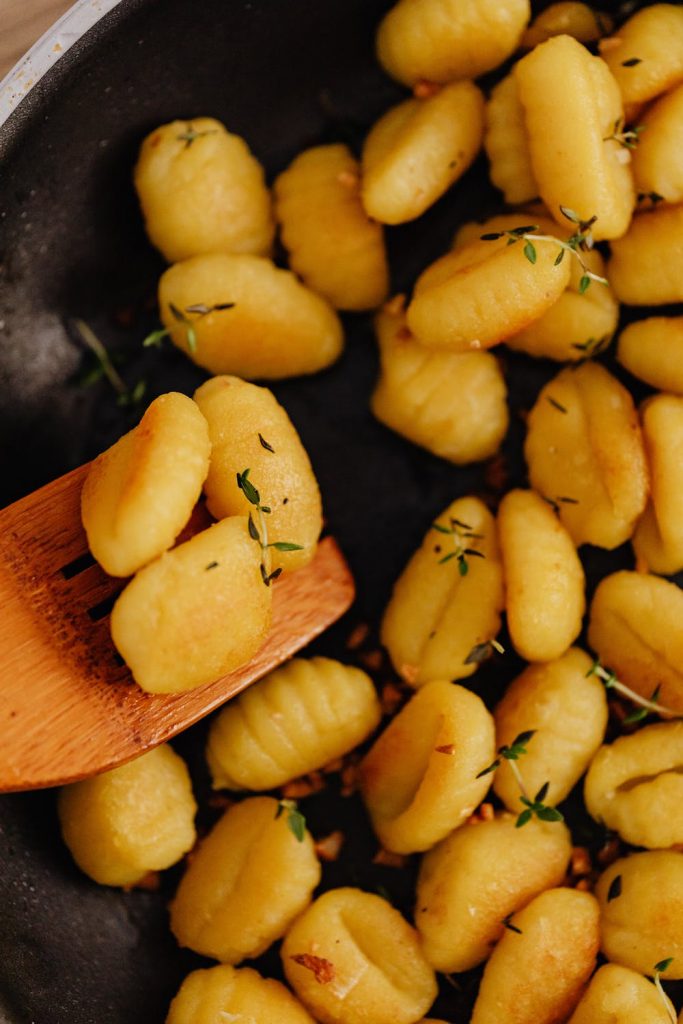 Versatile and delicious, difficult to pronounce but easy to prepare, today I want to talk about one of my forever-favourite dishes, quite possibly my desert island choice: gnocchi! (say nyokkee)

It all started at the beginning of the XVI century, when Italy started importing potatoes from the Americas. All the cooks in the country began experimenting with this new, unheard ingredient, so much to create a specialty in each region. Travelling down the peninsula and in the islands, we can see many different ingredients in the gnocchi recipes, in some cases also adopting a more traditional name, close to the dialect spoken in the area.

Starting from the canederli in the North (where the Italian word hides a German root, knödel in fact means gnocco) all the way down to Puglia where they are called triddhi. In Sardinia, instead, they have the beautiful name malloreddus.

Apart from the musicality of their linguistic variation, gnocchi can be prepared with a huge variety of ingredients, from the famous potatoes to ricotta cheese, from stale bread to corn flour, and the list can go on and on. In addition, the condiment on top can also be changed according to what we fancy or have available in the fridge.

Appreciated and known all around the globe, the gnocchi have always been considered a rather poor plate, one available in even the more modest house in Italy. In Rome, according to the tradition, gnocchi were usually served on Thursday, following the popular saying “Giovedì gnocchi, Venerdì pesce, Sabato trippa” (Gnocchi on Thursday, Fish on Friday, and Tripe on Saturday). The gnocchi alla romana, best consumed in the capital, are actual quite different from the rest of gnocchi family, as they are made with polenta flour, round-shaped and cooked in the oven covered with butter and cheese, rather then boiled.

Thanks to an Italian friend met here in the UK, I have also got to know the delicious spätzle, again influenced by the German language and cuisine, where flour, eggs and water are mixed with healthy greens and then seasoned with cheese and cured meat from the north east of Italy.

On the west side, still in the northern area, we find gnocchi alla bava, made with buckwheat flour, swimming in a delicious fontina or toma cheese cream.

However, I must admit, my desert island dish would be Gnocchi alla Sorrentina, and only reading the name I have a clear image in my mind of Sorrento on a sunny day and the blue sea twinkling at me while I am eating this delicacy!

The recipe is quick, fun and can involve help from the younger ones in the family. So, if you are wondering how… take a look at our homemade gnocchi recipe, the best gnocchi recipe you’ll ever find!