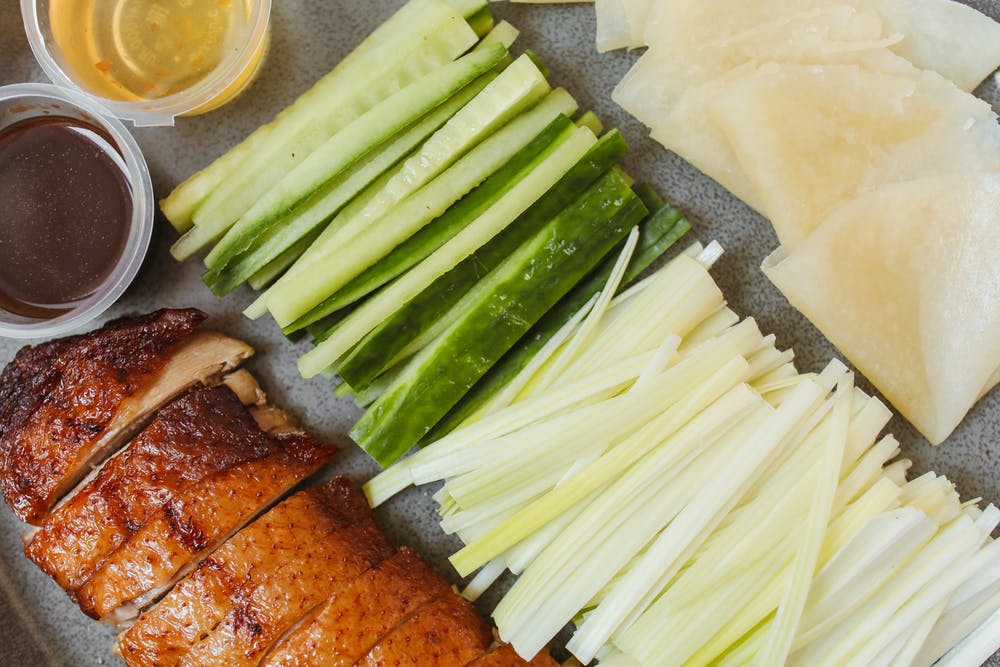 If you are keen on Chinese cuisine, you have probably heard of this famous dish. Peking duck is a traditional dish from Beijing which has been made since the imperial era. The meat is thin, the skin is crispy and the most authentic way of having it is by eating mostly the skin with very little meat underneath. In most restaurants, they tend to slice the duck in front of the dinners. This type of meat is often eaten with spring onions, cucumber and sweet bean sauce with pancakes rolled around the fillings. Sometimes people also put pickled radish inside, and other sauces like hoisin sauce.

Duck has been roasted in China for many years, at least since the Southern and Northern Dynasties. A variation of roast duck was prepared for the Emperor of China in the Yuan Dynasty. This dish was originally named “shāo yāzi” (燒鴨子) and it was fully developed during the later Ming Dynasty, and by then, it was one of the main dishes on every imperial court menu. The first restaurant specialising in Peking Duck is called Bianyifang, in Beijing in 1416. By the Qianlong Period (1736–1796) of the Qing Dynasty, the popularity of Peking Duck spread to the upper classes.

By the mid-20th century, Peking Duck had become a national symbol of China, and tourists and diplomats absolutely loved it. If you ever want to try the best Peking Duck in Beijing, take note of these two restaurants that serve this dish: Quanjude and Bianyifang. Both of these restaurants are centuries-old, each with their own style of making this wonderful dish. Quanjude is known for using the hung oven roasting method, while Bianyifang uses the oldest technique of closed oven roasting.

Keep your eyes peeled for the best Peking Duck recipe as we will be posting it very soon.